A Hundred Years of Film Theory

Münsterberg and beyond: Concepts, Applications, Perspectives

A century after Hugo Münsterberg´s… 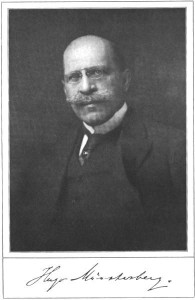 …pioneering publication of 1916, The Photoplay. A Psychological Study, an international and interdisciplinary conference will look at audiovisual media from a broad variety of perspectives and disciplines. The conference will highlight Münsterberg´s achievements as a scholar, who began his academic career at the University of Leipzig before going to Harvard, via the Universities of Heidelberg and Freiburg.

The interdisciplinary character of the conference reflects/corresponds to the wide range of visions and interests that Hugo Münsterberg pursued in the course of his life. Not only his academic career, but also his biography was characterized by one constant, which was change. Born to a Jewish family in Danzig, Germany, in 1863, Münsterberg had grown up in the middle of Prussian traditions and international cultural influences. After his studies at the Universities of Leipzig (Dr. phil.) and Heidelberg (Dr. med.) and the formation of his first psychological laboratory at Freiburg, he was invited by to the United States, where he taught and researched permanently at Harvard University since 1897.

Münsterberg´s scientific interests reached from philosophy, his first discipline at the University of Leipzig, to different fields of psychology and found a symbiosis in his studies on the new medium of film in the last years of his life. His psychological studies were mainly influenced, but simultaneously different from the theories of his doctorate supervisor, Wilhelm Wundt. Münsterberg´s work is noted for the independent and pioneering development of Wundtian experimental psychology based on fundamental concepts in philosophy and physiology. This was his later groundwork for behaviorism as well as for application oriented psychological sub disciplines like labor and organizational psychology, educational psychology, forensic psychology, and group psychology.

In addition to his manifold interests and activities as a scholar, Hugo Münsterberg played a significant role in the political trials and tribulations in pre WWI. At his time and still today, the views on his role as a German in the prewar period vary extremely between a German-US bridge constructor and a spy for the German Empire.

In 1916, at the age of 53, he developed the most important, science based and coherent early film theory, from a psychological perspective: The Photoplay – A Psychological Study (Münsterberg 1916, in German: Münsterberg/Schweinitz 1996). Only a few months later Münsterberg died in Cambridge, Massachusetts, during his Harvard lecture.

The conference in Leipzig from 29th June and 2nd July 2016 will provide insight and current research into Hugo Münsterberg´s work: mainly his film theory The Photoplay in the context with other early film theories. How these have been and are reflected from a psychological point of view will be elucidated in a panel about media psychology and reception.

Further presentations may feature analysis of individual academics, critics or consultants working for the audiovisual industry. Taken all in all, the conference will give a comprehensive view of the medium of film that may lead to the redefinition of the boundaries of cinematic experience.

Audiovisual culture has long been accompanied with – and shaped by – generalizing ideas about its inherent characteristic and meaning. From the early days of film, intellectuals, practitioners and scholars have been discussing its inherent properties or its connection to different media. Not long after Hugo Münsterberg published his The Photoplay: A Psychological Study (1916), scholars and critics from various countries offered theoretical ideas about film, focusing on its aesthetics, narrative possibilities, the relation of audiovisual images to specific cultural and political contexts and traditions or its eventual effects. This area focuses on the role of this early film theory and takes a new look at canonical works and examines forgotten theorists, ideas and debates. Presentations may feature original analyses of individual texts or theorists’ works from a variety of angles. Proposals may include analyses of specific theorists, development of schools of thought, dissemination of theory (e.g. in trade and specialist journals or academic writing), approaches to media social theory and early ways to implement theory into practice. Papers based on primary sources (archival documents, contemporary journals, etc.), international perspectives and comparative approaches are strongly welcomed.

Shortly before D.W. Griffith’s The Birth of a Nation (1915), Hugo Münsterberg saw his first film ever: Neptune’s Daughter (Herbert Brenon, 1914). Fascinated by the medium he had encountered, he wrote The Photoplay: A Psychological Study. When the book appeared in 1916, it was recognized as a new way of theorizing the new medium film, for the first time establishing psychological criteria for producers as well for the audience. Münsterberg published the first reception study of film. This area invites analyses of individual films using Münsterberg’s ideas, including considerations of film in comparison to other art forms, film reception, the relevance of aesthetic and technical means in the medium of film, and the value of cinema’s mimetic ability to represent reality. Paper topics might also examine Münsterberg’s life and work, as well as the impact and applications of his ideas. This area welcomes interdisciplinary approaches, and papers, which discuss the transnational influence of Münsterberg’s published work in both Germany and America, as well as in other countries.

From the early days of moving pictures, critics and film producers were interested in how the new medium influenced audiences. In order to gain a more thorough understanding, they often turned to the fledgling field of psychology. They were interested in individual cognitive and emotional responses as well as group reactions to the new medium – either to investigate the role of film in society or culture or, when it was sponsored by the industry to promote the success of films. This area investigates the psychological foundations of film reception studies. It addresses various forms of reception research from preview audiences, panels, focus groups, numerous forms of test marketing to more recent uses of social media and gaming. We are particularly interested in studies applying basic psychological concepts to practical reception phenomena. Proposals may include analyses of individual case studies, the development of certain methods (like physiological measures, eye-tracking, real-time-response measurement etc.), the dissemination of results, the implications of reception studies on film marketing and production, as well as ways of putting psychological theory into practice.

When Münsterberg investigated audience responses to the new medium of film, he was well-paid for a series of articles published in the trade press, gaining much attention. His work certainly pleased industry executives who wanted their medium to gain intellectual recognition. Münsterberg’s work provided an expertise not available within the film business. This arrangement was common in the history of film, radio, television, and online media. From the early days of film to interactive network media, consultants – including experts in public relations – played an important role in legitimizing content, often providing a compliant ‘seal of approval.’ While the industry provided much scope for original research, consultancy also led to accusations of academics compromising their integrity in the pursuit of financial incentives. Journalism played – and continues to play – an important part in the promotion of audiovisual media. Leading critics, in fact, could literally influence the success of a production by what they wrote before the film was released. Presentations may feature analyses of individual academics or critics working for the film business or other sponsors, investigate the role of consultants, or take a closer look at how journalists or critics influenced production from the early pre-production stages through distribution, promotion, and reception.

Cinema has always tried to reinvent itself, embracing the latest technology, new forms of expression and marketing methods, as well as new narrative strategies. Instances include the use of sound, color, 3D, widescreen, immersive media environments, up to current forms of streaming, including Netflix and Amazon.com. This area investigates the ways in which the boundaries of the cinematic experience have been redefined throughout the history of moving images from early fairground attractions to multiplex cinemas, to yet more contemporary developments, i.e. in movie theatres or at home. This area particularly welcomes papers based on primary sources (archival documents, contemporary journals, interviews, etc.). Proposals may include case studies of films, screening facilities, distribution and promotion, as well as the changing role of cinema within global, national, regional, or local contexts.

The interdisciplinary character of the conference reflects and corresponds to the wide range of visions and interests that Hugo Münsterberg pursued in the course of his life. Not only his academic career, but also his biography was characterized by one constant, which was change.