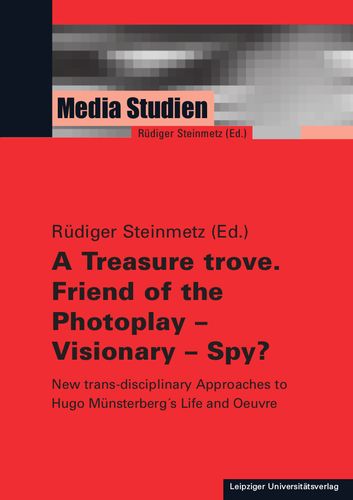 A Treasure trove. Friend of the Photoplay – Visionary – Spy?

The outgrowth of Hugo Münsterberg’s academic work is even today a nearly inexhaustible subject of international research. His broad influence on several new application-oriented academic disciplines, and especially his fundamental shaping of the field of Psychology out of Philosophy, make him seem so alive. His final academic work, the first research- and academically-based film theory set forth in The Photoplay of 1916, has made him the focus of current film and media studies and is still relevant, as this book confirms.

We see in Hugo Münsterberg a vivid researcher and teacher, who – following William James, who brought him to Harvard – opens more new vistas in Psychology than anyone else, who bursts with a fertility of ideas, and whose writing bears a light touch. And we see Münsterberg struggling all his life for his teacher Wilhelm Wundt to accept him as his disciple, only to be met with accusations that his thinking was immature, and his treatment of an abundance of academic problems insufficient in its methods. And we see a tragic figure with an exuberant self-perception, caught between his idealistic attempts at building bridges between the USA and Germany, a rise in anti-German-American sentiment, and his increasingly unwise pre-war behavior vis-à-vis the U.S. public.